The objective of this blog is to raise the awareness of teachers, educational bodies, and distributors to the medical and skin treatment industry of how teaching incorrect, superseded
or redundant information results in a knowledge base that has no relevance to the current times.

The old language of ‘broken capillaries’ being the one most often used regarding education for the modalities available for treating vascular disorders is an excellent example, so let’s review the physiology of the circulatory system and find out why the term ‘broken capillaries” should be relegated to the past.

The body has two parallel circulations: vascular, and the less conspicuous lymph circulation, the latter working in synergy with the circulatory system. The circulatory system is continuous; with no beginning or end and a heart, pump to drive it, whereas the lymphatic system has “dead end” capillaries and no heart pump.

There are several vital functions that the circulatory system plays in the health and wellbeing of skin; these functions most often work in synergy with the lymphatic system.
The first important role of the circulatory system is the transportation of materials such as blood cells, hormones, nutrients, oxygen and waste to and from all cells of the body.

Secondly, by working in synergy the circulatory system along with the lymphatic system, keep all fluids in the body constant, and includes the transport of specialized cells such as T lymphocytes and macrophages of the immune system. Finally, the extensive network of capillaries also functions to control the cutaneous blood flow, in response to the bodies’ temperature control requirements, stabilizing pH and maintain homeostasis. In other words, very significant.

The network of capillaries in the neck and facial area of the skin is much denser than the torso or limbs. As a result, the face and neck are one of the first areas of the body to show a colour variation due to a shift in blood flow, pressure or lack of oxygen. This colour change reflects an alteration to homeostasis and the bodies wellbeing or health.

Unlike the arteries and veins, capillaries are fragile and are only one endothelial cell thick, and so small that blood cells can only pass through them in single file.

Capillary cells have the ability to regenerate from pre-existing blood vessels; this process is called angiogenesis. Angiogenesis occurs in the healthy body for healing wounds, and for restoring blood flow to tissues after injury or trauma.

How do endothelial cells do this?
Each endothelial cell is programmed to mend or create a new capillary (Rebudding) if any injury, break or tumor occurs, ensuring that there is no interruption of blood flow and the circulatory system remains continuous.

Angiogenesis occurs in the early phases of wound healing, repair or replacement of the vascular system. (The Lag or Proliferative phase: 3-5 days)

As they migrate into the surrounding tissues, the activated cells begin to divide, rapidly organizing into the hollow tubes (Rebudding) that gradually evolve into a mature network of blood vessels.
As a result of the newly formed capillaries, an increase in the vascular network may appear as telangiectasia or couperose.

If there were a break in the circulatory system, blood cells, hormones, nutrients, and oxygen would fail to reach cell producing layers of skin or tissue, and cellular necrosis or tissue death results.
There can be an increase in vascular matting or vascular threading due to angiogenesis, but there are no broken capillaries.
It is because of angiogenesis, that the term “broken capillary” is incorrect and misleading when discussing vascular skin conditions or disorders with patients or clients.

What are spider naevi; how do they form?
Spider naevi result at any age, even children can develop them as a result of running a high temperature, or they appear across the décolletage of menopausal women and are an indicator of extra oestrogen or a result of an injury.

Developed by centrally dilated arteriole from which numerous small capillaries radiate, that resemble the legs of a spider, which how the lesion came by the name, ‘spider naevi.’

Arterioles are the connection between larger arteries and the smaller capillaries that bring plasma containing hormones, blood cells, oxygen and nutrients to cell producing layers such as the papillary layer of the dermis and basal cell layer of the epidermis.

A junction called a precapillary sphincter which controls the blood flow to the capillary might have lost the ability to control blood flow due to injury, inflammation or deteriorating supporting connective tissue.
As a result, blood seeps into a small area of surround connective tissue creating the spider appearance.

To summarize: What I hope you have gained from this information is updated knowledge regarding apparent vascular anomalies, and that that the terminology you use into the future is factual, ‘time current’ and professional. FBH 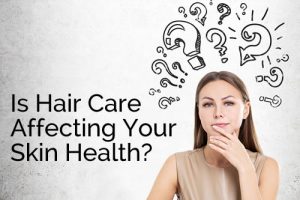 It’s Ironic that many people spend a lot of time and money on skin care products for their sensitive, reactive skin, but don’t consider that 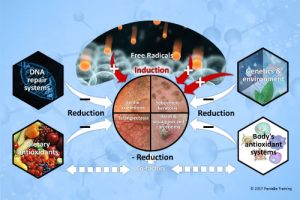 Why do many ageing skins develop comedones and other keratolytic disorders?There is now universal agreement that free radicals are involved in the physical, biochemical, and