Why do many ageing skins develop comedones and other keratolytic disorders?
There is now universal agreement that free radicals are involved in the physical, biochemical, and pathological changes associated with aging. Oxidative damage to proteins, lipids, and DNA accumulates and increases with age, and is associated with age-related skin conditions, disorders and diseases.

In mature skins, and those that have had extensive sun exposure over 60 plus years; senile comedones can appear in the oddest of places. An example is the eyelid area that we can see here.
It is important to understand that this type of lesion does not get categorized into ‘non-inflammatory acne. Despite the fact it is a comedone, it is best practice to classify it into Aging Keratolytic Skin Conditions.
What causes an aging skin to show a variety of skin conditions that it has never suffered from at any previous age? Well, the answer to this question is cellular age. Ageing cells can be under the heading of two of categories: Mitochondrial Ageing or Cellular Senescence.

What is a Mitochondria?
Mitochondria play a significant role in the generation of energy for creating whatever that cell was designed to make. All cells of the human body have many Mitochondria.
Having established Mitochondria are organelles within cells that take nutrients and break them down and creates energy-rich molecules for the cell,(ATP) we need to recognize that as Mitochondria generate the energy that our cells require for creation; that this energy causes the Reactive Oxygen Species (ROS) of free radical to be produced,  Oxidative stress is created as a side effect of this energy creation.

To prevent the damage from ROS, cells possess several antioxidant enzymes such as Superoxide Dismutase’s (SOD), Mn SOD and Cu/Zn SOD, Catalase, and Glutathione Peroxidase, which are located in the mitochondria or the intracellular fluid (Cytosol).


The ageing antioxidant defense systems and cellular organelles; Mitochondria Ageing-Mitochondria DNA Damage-Cellular Senescence
Under normal conditions, cells can remove or detoxify the ROS to lower levels by using antioxidants and thereby maintain balance. In an ageing cell, these built-in antioxidant defense systems decline to result in oxidative stress. The subsequent lipid peroxidation causes the dysfunction of a cell’s lipids, nucleus, and mitochondria energy production and creation.

To compound the cellular dysfunction, a decline in mitochondrial respiratory function along with an insufficient supply of energy can significantly increase mitochondrial free radical production (Van Houten et al., 2006; Lee et al., 2007). Increased oxidative damage may enhance inflammatory responses and alter cellular functions resulting in the many of the skin conditions seen on senior skins, such as Senile Comedones, Seborrheic Keratosis and Skin Cancer.

Depending on the age of the client the level of deterioration could be M/DNA damage, M/DNA ageing or Cellular Senescence.

Ageing sebaceous gland cells and keratinocytes with deteriorating supporting connective tissue combine to create the perfect environment for senile comedones.
Both the sebaceous gland cell (sebocyte) and keratinocyte will have a slower cell turnover (mitosis) and poor quality secretions (Ceramides of the multilamellar lipids and Triglycerides of the sebum) due to dysfunction of the cell’s lipids, nucleus, and mitochondria energy production.

In addition to slow cell turnover, the keratinocyte fails to complete the cornified cell envelope compaction process and corneocyte formation, resulting in an increase in the ratio of fragile, immature cornified cells and reduced stratum corneum cohesion.
This failure to compact leads to a dramatic increase in scaling and a compaction of multiple layers of sheets of unseparated corneocytes and blocked pilosebaceous ducts; all of which will contribute to the formation of a senile comedone. See this video of the lifecycle of the keratinocyte to learn more about the cornification process.

Other than the physical changes that come about with cellular ageing, there is the nutritional changes that occur as part of the ageing process.
This is a difficulty in the absorption of nutrients that have an antioxidant profile; as well as those essential lipids such as Omega 3 needed for cell membrane health, the multilamellar lipids and acid mantle formation.

The elderly should also be encouraged to consume a diet rich in antioxidants as there is evidence that such a diet especially in combination with a healthy life style can lower the rate of all-causes and cause-speciﬁc skin disorders.

To summarize the key points so as to ascertain why maturing skins get comedones and other keratolytic disorders:

1. Cellular age and mitochondria age or damage: Cellular memory and energy are compromised

3. Incomplete corneocyte compaction by the keratinocyte: Cornified cell envelope formation is incomplete resulting in fragile immature cornified cells that will reduce skin barrier defense and aggravate the desquamation process of the corneocyte.

4. Incomplete desquamation of corneocyte: Corneocyte fails to desquamate from within the pilo sebaceous duct and from the skin surface.

5. Poor quality and quantity of sebum created by the sebocyte: Reduced cellular memory, oxidative stress and nutrition will result in reduced sebum Q&Q.

8. Increase in reactive oxygen species of radical (ROS): Increased ROS combined with declining antioxidant nutrition will compound all points 1 to 7. 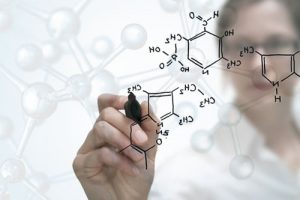 Dermatological, Cosmeceutical and Corneotherapy:The difference explained There is perhaps equal measures of misunderstanding and misconception regarding the grades of skincare products, particularly when the formulations

The Importance of the Skin Surface Microflora

I have often said that many of the modern skin conditions/disorders of today are caused by over treatment and/or over cleansing by the patient. This