There are two Questions I am often asked during my seminars that deserve an airing: If the epidermis is renewed every 30 days, why don’t I have a beautiful and perfect new skin every month? And if every pigment carrying Melanosome is transferred to a keratinocyte, and every keratinocyte ultimately desquamates in 30 days, why do I have pigmentation?

The reason for these questions arising is due to a combination of prior learning and the amount of literature written about epidermal cell turnover giving the impression that a new epidermis is the end result of the 30-day cell turnover. Where did the original idea that every cell of the epidermis turns over in 30 days come from?

The generic statement epidermal cell turn over in 30 days is used in most beauty therapy and dermatological literature. At one time, the amount of research done on the epidermis may have justified this claim, but with the vast knowledge we have today, the statement is somewhat misleading.

This means that a fundamental mistake in the understanding of the cells of the epidermis is continuing to occur and that basic beauty therapy training that still teaches this presumption is flawed. This means going back to the beginning for new thinking to be put in place.

There are a number of key cells in the epidermis, each with a different function and vastly different lifecycles. Up to 20% of these cells do not desquamate at the end of their life, so to lump them all in to the 30 day scenario is both incorrect and fosters a lack of understanding.

The earliest reference I have relating to the physics of what goes on in the epidermis is dated 1986 and is a paper that was published in a journal for cosmetic chemists and formulators.

This paper was the first I had read that gave a detailed account of the keratinocyte lifecycle and differentiation.
It was for me revolutionary, thought provoking and an eye opener. Even after fully understanding that the keratinocyte had a lifecycle of 8-10days from mitosis to arriving in the stratum corneum, I never really appreciated the significance and made the connection.
It was much later when further research led me to pursue more knowledge about the melanocyte that I discovered that the keratinocyte and melanocyte were very different but worked in synergy with one another.
I discovered that the keratinocyte has an unlimited stem cell resource, along with a short and eventful lifecycle that ultimately ended in desquamation. Conversely, the melanocyte lives for years, is slow cycling and has no major stem cell resource to draw on if destroyed.
It immediately becomes obvious that these two cells are physically dissimilar and have very different lifecycles. One has a lifecycle of 10 days and the other years, however they both reside in the epidermis and work in synergy to build an important part of the skin barrier defense system.

There are still a number of other epidermal cells to discuss during the course of this article, but at this point I ask you; with this information about the Melanocyte and keratinocyte, how can the epidermal cell turn over in 30 days statement be substantiated, and do you believe it now?

Let us review a short-list of the resident cells of the epidermis, along with a brief breakdown of the role that each plays, and their individual lifecycles.
The skin has a very elaborate defense system, where different types of cells act together or successively. Besides the keratinocyte, there are three types of specialised cells in the epidermis.
The melanocyte produces pigment (melanin), the Langerhans’ cell is the frontline defence of the immune system in the skin, and the Merkel’s cell’s that serve as mechano-receptor and are involved in the function of touch.

The keratinocyte is the predominant cell of the epidermis and accounts for 70 to 80% of the cellular population.
Keratinocytes are programmed to undergo cell death, this process is known as apoptosis, with a life of around 8 to 10 days from mitosis to arriving in the stratum corneum, depending on age and environment.

It is a hydrophobic cell and is responsible for generating and maintaining the skins barrier function. It has an unlimited stem cell resource that is situated in the bulge area of the hair follicle and deep rete pegs.

Another cell that is involved in epidermal protection is the Langerhans cell, which are dendritic cells originating from the bone marrow. Langerhans dendrites will shorten with old age and are susceptible to UVR, chemical and water burns which ultimately cause a cell migration from the epidermis.

These cells are easily replenished from bone marrow when required, providing the epidermal environment is intact/healed. They represent around 2-5% of the epidermal population, but because of their dendritic nature, have the ability to protect up to 25% of skin barrier defence.
The function of these cells is to detect any foreign bodies (antigens) that have penetrated the epidermis, capturing intruders and then carrying them to the lymph nodes in the dermis, where they are presented to the lymphocytes. A cellular type of immune response is then triggered, neutralising and finally eliminating the antigen. The nature of the Langerhans cell means that this too will have a longer life than 30 days.

Merkel cells are non-dendritic non-keratinocytic epithelial cells located primarily in or near the basal layer of the epidermis. Merkel cells are commonly found in innervated clusters around hair follicles.

Merkel cells account for 6-10% of the cells in the epidermis, and are situated between the keratinocytes in the basal layer. They will remain in contact with a nerve ending.
They serve as mechano-receptors and are involved in the function of touch. They detect vibrations, pressure, touch etc, which are transmitted via a network of fibres to the brain as a stream of nerve impulses. These impulses will result in a sensation.
The origin of Merkel cells is uncertain because they share both epidermal and neuroendocrine features, however they too will be long living cells.

Formed at the neural crest during the embryonic stage, as the foetus develops the melanocyte will start migrating away from the neural crest and travel through the body until arriving in various parts of the body where pigment is normally found, like the epidermis, hair and eyes. They will eventually settle in the lower region of the epidermis the basal layer.

Around one in every ten cells in this layer is a melanocyte; they are a stable, slow cycling and long-lived cell, with no major stem cell resource. Melanocytes are dendritic cells, and it is estimated that each melanocyte makes contact through the dendrites with about 35 keratinocytes.

Their function is to produce melanin, the pigment that gives the skin its colour, and to transfer it to the surrounding keratinocytes by means of cytoplasmic processes. The keratinocyte will ultimately carry the pigment to the skin surface and desquamate.

So what have we learnt? Well we certainly learnt that the 4 major cells of the epidermis all have different origins and life cycles. We also know that the keratinocyte is the one cell that has the shortest life and an ulimited stem cell resource. The Langerhans cell is also replaced from the bone marrow when required, however the melanocyte is long-lived and slow cycling with no major stem cell resource to repair or replace.
The Merkels cell is still under investigation, but could be placed within the nervous system cell family, which are slow to heal and repair, and definitely not turning over in 30 days.
Not one cell in the epidermis individually has a 30-day life cycle. In reality, they all have different lifecycles and most interestingly; they all work in synergy with the keratinocyte.

To further the perception of beauty therapists as skin professionals, our basic training and literature must be based on current facts, and not the misconceptions of previous and obsolete knowledge. Only then will we be treated with the respect we deserve.

If you wish to challenge yourself, I want you to think about my second question.
“If every pigment carrying Melanosome is transferred to a keratinocyte, and every keratinocyte ultimately desquamates in 30 days, why do I have pigmentation?”

Commonly misunderstood within the skin treatment /specialist professions, is the term Dermal Pigmentation, and it is appropriate that some clarity and thought to the subject 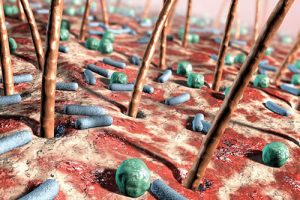 The Importance of the Skin Surface Microflora

I have often said that many of the modern skin conditions/disorders of today are caused by over treatment and/or over cleansing by the patient. This